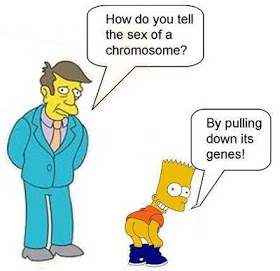 It was interesting to note that perhaps gender was the only most natural and visible categorization that exists in almost all the species with the exception of certain unicellular and other asexual organisms. These asexual organisms supposedly can only reproduce the identical offspring through the mitosis or other mechanisms.

Nature bestows on all species having both the genders, an ability to reproduce the diverse offspring who have an identity and intelligence of their own. It is only possible because the offspring is designed as a combination of two different, independent, complementing, intelligent beings. The ongoing genome and DNA research has also proved some of the wisdom expressed by the Rishis, the scientists of the ancient era expressing their findings in Sanskrit, the scientific language of that time.

But is there more to gender beyond what we can see with naked eye or by using man made instruments? At the core, the soul has no gender. It is only restricted to the concept of a physical body and resulting psychological thoughts.

Gender is a concept that is made up of a differentiation of certain muscles, glands and other physical attributes guided by the genes with which one is endowed at the time of conception. Because of the chemical nature of the functioning of our body, the thoughts and actions will also be influenced by these physical differences in the body.

It is important for the nature to have both these aspects of gender to co-exist to ensure ongoing process of reproduction and existential nature of the world. Even at the individual level the physical body is essentially an instrument to express actions that are needed to be performed based on the purpose of individual existence.

Each of us are endowed with a physical body that is needed for us to carry on the Karma that we must act on. Based on the action needed to be performed, the physical body has different attributes including that of gender, other physical and psychological abilities.

There is an inherent diversity in the Nature required for its own existence. The air needs a change in the pressure to move from place to place and helping each of the life forms to breath and sustain. If everything in the nature was equal, then there wont be any movement of even air, a catastrohic pralaya. At the core everyone of us is a Shiva, the universal identical soul, but the nature Prakriti has the inherent diversity to help us sustain the life otherwise we will all be nothing but Shava, the dead and long one.

As we transcend from the mere physical and psychological realms of looking at self and try to understand beyond , we realize that the concept of gender fades away revealing the true nature of the unique and universally identical soul that dwells in each of us. These heated arguments about gender are only valid for the physically manifested world.

Irony of many debates is that we try to bring equality into the physical realm that has beautiful natural diversity and we are not ready to go beyond into the spiritual realm which has a beautiful universal identity.